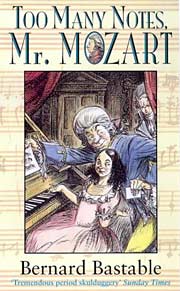 Barnard, Robert. Mozart Mysteries
Divergence: 1764 CE
What if: During a visit to England to show off his prodigy son to the English court, Leopold Mozart decided to remain in England as a result of being accidentally overpaid by a royal courtier.
Series note: Whodunits Dead, Mr. Mozart and Too Many Notes, Mr. Mozart.
Comments: The cover of some editions credit "Robert Barnard writing as Bernard Bastable".