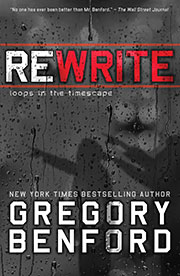 Benford, Gregory. Rewrite: Loops in the Timescape
Divergence: 1968 CE
Summary: A middle-aged professor dies in a car crash, and wakes to find that he is again a 16-year-old in 1968. He uses his knowledge of movies to embark on a career as a young but highly successful Hollywood screenwriter-cum-producer. But years later he begins to suspect he is not the only person who has undergone a "rewrite".
Comments: Aside from Hollywood events, allohistorical content is not detailed, but is nevertheless present. Four timelines are experienced, of which possibly the third is ours. This volume bears thematic connections of varying explicitness to Ken Grimwood's Replay, the works of Philip K. Dick, and Benford's own Timescape.
Published: Saga 2019 (1481487698BUY, 1481487701BUY).