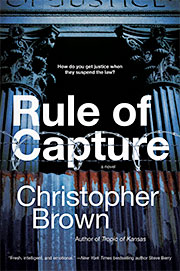 Brown, Christopher. American Dystopia
Divergence: 1980 CE
What if: The American embassy hostages in Tehran were executed, and a year later Ronald Reagan was assassinated, leading to Alexander Haig's taking over the government.
Series note: Series including in apparent event order Rule of Capture, Tropic of Kansas, and Failed State.
Comments: Clues to the allohistorical background are provided in Tropic of Kansas but are not found in the subsequently published prequel Rule of Capture.

Brown, Christopher. Rule of Capture
Divergence: 1980 CE
Summary: Legal thriller set in the same timeline as Tropic of Kansas, but occurring earlier.
Series note: Second published volume but apparently first in event order of American Dystopia.
Comments: Dystopian detail in this volume is not cast as explicitly ahistorical and could be interpreted as being in the near future if no connection is made to Tropic of Kansas.
Published: Harper Voyager 2019 (0062859099BUY).