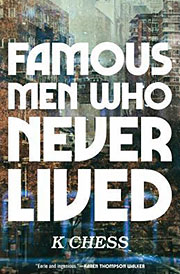 Chess, K. Famous Men Who Never Lived
Divergence: 1909 CE
What if: Minor differences in history began accumulating in 1909, including the non-childhood death of a major science fiction author and the first publication of modern tarot cards, until over a century later the United States engages in nuclear warfare with a communist South American state.
Summary: After 176,000 Universally Displaced Persons are transported across time to our New York, fleeing radiation clouds from a sabotaged reactor, one of them seeks to create a museum in memory of their lost world. She encounters unexpected resistance.
Comments: Very few historical details are provided of the alternative timeline, and most differences shown are cultural.
Published: Tin House 2019 (1947793241BUY).