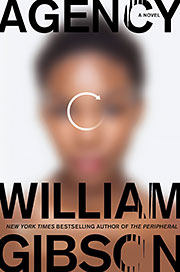 Gibson, William. Agency
Divergence: 2015 CE
What if: Unspecified event(s) in 2015 led to the 2016 Brexit and American presidential election going the other way.
Summary: People in an alternative 2017 timeline and from our own 2136 interact with an artifical intelligence attempting to avert nuclear war breaking out due to events in Syria.
Comments: Sequel to Gibson's non-allohistorical Peripheral.
Published: Berkley 2020 (110198693XBUY, 0451490983BUY).