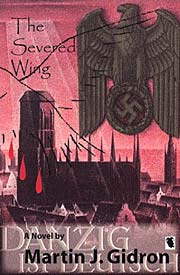 Gidron, Martin J. The Severed Wing
Divergence: 1912 CE
What if: Teddy Roosevelt was elected president in 1912 and brought the U.S into the European war following the sinking of the Lusitania, and Jean Jaures was not assassinated in 1914. Earlier American intervention in the Great War causes it to end sooner and with less draconian terms imposed on Germany, and afterwards Jaures successfully promotes European socialism.
Summary: The story of a Jewish, Polish journalist working illegally in New York at the end of a 20th century in which the Holocaust never happened. Will he ever see his girlfriend again after she travels to Greece? Why the frequent nightmares and odd "shifts" in the world around him?
Published: Livingston 2002 (0942979966BUY, 0942979974BUY).
Awards: Winner (tie): 2002 Sidewise Award for best long-form alternate history.