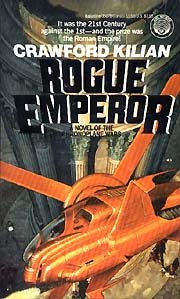 Kilian, Crawford. The Chronoplane Wars
Summary: Novels in which a collapsing America c. 2000, alerted to possible destruction of the Earth decades in the future, discovers gateways to other past and future Earths. All novels feature Intertemporal Agent Jerry Pierce. Allohistorical content is variable, with Rogue Emperor being the most explicit.
Series note: Series including The Fall of the Republic, Rogue Emperor and The Empire of Time. Although published first, The Empire of Time is in internal order the end of the series.

Kilian, Crawford. Rogue Emperor
Divergence: 94 CE
Summary: Intertemporal Agent Jerry Pierce investigates the assassination by antitank weapon of the Roman emperor Domitian in 100 CE of another timeline, and discovers a plot by Christian Militants to take over the Roman empire.
Series note: A novel of the The Chronoplane Wars.
Published: Ballantine/Del Rey 1988 (0345350782BUY); iUniverse.com 1998 (158348017XBUY).