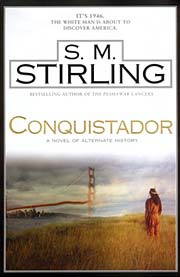 Stirling, S.M. Conquistador
Divergences: 323 BCE, 1617 CE
What if: Alexander of Macedon lived until 280 BCE or Pocahontas lived until 622 CE.
Summary: Involves a crosstime gate from a familiar California to world in which Eurasia is dominated by the distant remnants of the Alexandrian empire, but the Americas were never "discovered".
Comments: The timeline in which Pocahontas lived until 1622 is little different from ours and its use might not be noticed for discussion in the the appendices.
Published: NAL/Roc 2003 (0451459083BUY), 2004 (0451459334BUY).
Awards: Finalist: 2003 Sidewise Award for best long-form alternate history.