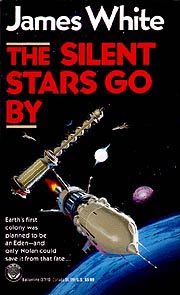 White, James. The Silent Stars Go By
Divergence: c 200 BCE
What if: C. 200 BCE, an Irishman returned home from Alexandria with the plans for Hero's aeolipile. This led to an industrial revolution 1000 years early, at about the same time that Brendan discovered the New World.
Summary: In 1491, the Empire of Hibernia launches man's first starship, and her outspoken surgeon suspects a religious conspiracy aboard.
Published: Ballantine/Del Rey 1991 (0345371100BUY).